The Big Horns in context from the front yard (no zoom lens). Talk about big sky…

Sunday: I took a break between getting the studio set up and beginning to make paper, and had lunch out on the front patio.  It was overcast and breezy, but suddenly the Cloud Peaks, just barely visible in the haze, were spectacularly illuminated by the sun appearing somewhere to the west. The snow was a bright blinding white, the peaks in sharp relief.  In the time it took to think of going back to the studio for my camera, they faded again.

Monday: My test sheets worked! I took my life into my hands because I had no time to make anything other than wet tests before I left.  (Well, not really, because I could have scrapped working on (S)Edition in favor of all new work). But though the paper is slightly grainier than the last batch, it’s of acceptable shrinkage and color to keep working on (S)Edition for the first week or so.  I do have to make yet another trip into Sheridan, because somehow, I packed the wrong size su for my larger deckle box (sigh).  However, the studio things are now in motion. I can make the (S)Edition “stems” with the smaller sheets, though it means pouring a few extra. I’m going to hold off a Sheridan trip for a few days while I figure out things about the first new piece (such as: Which is the best one to start with here? What can I build with the available tools and what will I need to build it?) and then I can make tests and hopefully go get all the extra materials in one swell fifty-mile-total foop.  In the meantime, today I’m testing the possibility of taking advantage of the climate (below) and making more sheets. 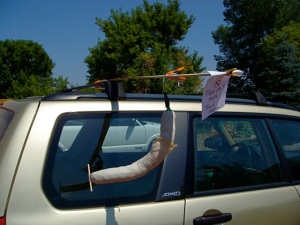 Three of the residents, Nina, Ravi and Andres went to a small-town rodeo on Saturday and had some interesting observations and experiences.  I had considered going myself, because one of the featured events was “chicken roping” and I was mightily curious about that, but I needed the Sheridan Home Depot more.  Nina said it was an event for kids, and that they were amazingly skilled at lassoing…chickens.

4 thoughts on “Moving Along…”