I am cautiously proclaiming myself well again; even the fever blister is gone (and I am so relieve to stop tasting the camphor in the effective but awful topical med). 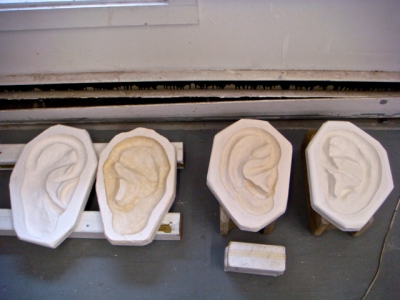 It’s been Almost All Ears here, slowly carving, handbuilding, casting, breaking down and beginning again, but I now have four viable molds of different ear types and have begun the much more fun activity of actually casting the pieces, and thinking about what else might be made during the next two weeks while ears are drying.  The response to the project during slide night on Monday and last night’s lengthy open studio crawl has been excellent. I had wanted to make two more smaller molds (or rather a single mold with double ears), but I am out of plaster and so is VSC; we’ll see if I can talk someone out of a quarter-bag or so. 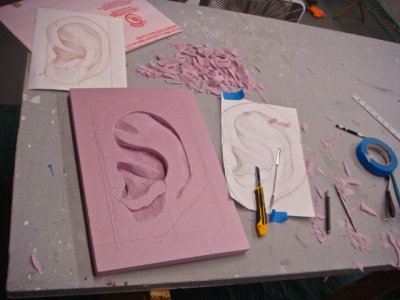 I’ve met several very interesting, fun people; some will leave tomorrow and a few new folks come in, but the bulk of us are staying on.  I did pretty much lose two days to the election, All Eyes fanatically glued to the computer, unable to look away from Huffpost’s live election results (ultimately better than I believed possible, with ALL the idiotic ‘rape’ candidates defeated and SO many fantastic women elected). I lost the next day to recuperating from staying up till 3:30 to see the president’s acceptance speech (I gave that day up to laundry as well, sewing some ear inserts while waiting in the laundromat, so I did accomplish something).. 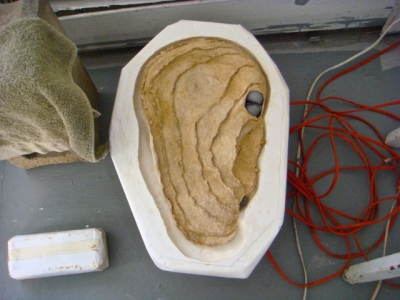 There is a benefit that’s coming up next week for an incredible organization in Illinois: Equip for Equality. Read their about us page to learn what they do; it’s invaluable. They are tireless advocates for all disabled people in my home state. The benefit information is here, and if you scroll down, it includes a donation link. If you can, please support their important, relevant, necessary work.  I’ve done so by donating this piece to the auction, and writing the caption to accompany it: 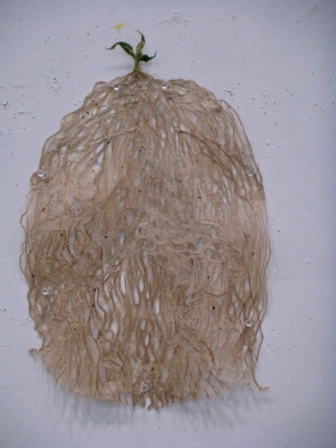 “Too often, the key factor that is perceived about someone with a disability is the  difference, either in the way we look or, in the case of ‘invisible disabilities’ such as deafness, the inconvenient differences in the way we must be interacted with. The vast root system of our humanity, intelligence and hearts remains out of sight.”

Please help Equip for Equality continue their considerable efforts to rectify that.

4 thoughts on “All Ears”