I’m home, and though I did take Sunday for an all-day, no-alarm Giant Thud, I still have a week of busy-ness and overlapping events (all of which I’m grateful for) before I begin truly settling in for the winter, and quietly begin to process all that’s occurred this year.

First, the art that happened in Vermont: 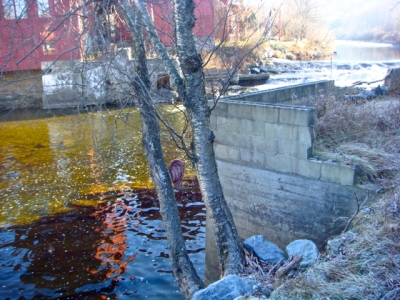 Here’s where the ear was installed (just one, because I’m not sure my bit of structural jury-rigging is going to keep this one any more stable than the first).  Initially, I wanted them to be on dead trees only. I was at dinner at one point, thinking aloud about how I was to differentiate between dead and live trees in late November. Vermont Studio Center co-founder Jon Gregg was at my table and said, “You are in Vermont.  People drill into live trees all the time.” And so I spent Wednesday afternoon hanging out over the river, grateful for all the tree-climbing I did as a child.  I was too good with my dyeing, and the ear side blends into its setting, making it quite difficult to discern from across the river.  That isn’t necessarily a bad thing at all. 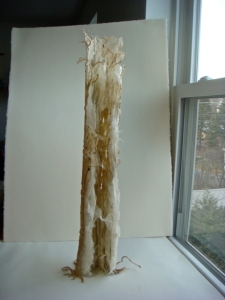 These two are in progress still, a few more things to be added to the tall one, structural work on the smaller.

I packed the car up Wednesday night after open studios, documented the ear location Thanksgiving morning, then had a lovely, sunny drive, skirting the Canadian border to arrive at Velma’s warm, wonderful North Country sanctuary. The day was just perfect: sunny, not-cold, a spontaneous meadow milkweed harvest, a tasty dinner for four with even tastier conversation (which I could hear ALL of; excellent after a month of meals in a room with 50+), and Velma and I talking, talking, talking late into the night and resuming in the morning. Just: wonderful. Also to see so much of her work in person! I wanted to stay.  I left with generous gifts of milkweed, flax and cedar fiber, a perfect packed lunch and this:

my own ‘witches’  brew’ – eco-dye bundles (my first ever!) of linen and paper –  to be opened in a few days, to extend the day’s warmth and friendship whenever I look at them.  On a rainy drive heading south to be funneled onto interstate blandness, I marveled at the connections the internet allows us, once again.  In an earlier life, Velma and I would have been neighbors (just before our paths diverged, and I chose art school, a partner I am still friends with acquired acres in the North Country and built a house there, where he lived for many years).  And yet, Velma and I met anyways, for which I am very grateful, as well as for meeting her sweet, smart, intrepid companion Wendy: border collie love and wistfulness on my part (she is a bit camera shy up close). 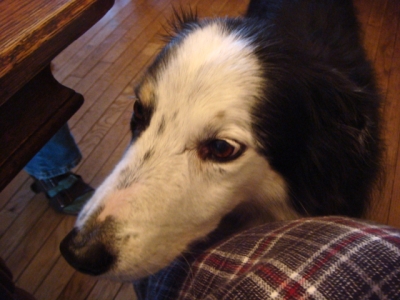 I hit some nasty weather, lake effect snow/hail and nasty winds coming off Lake Erie, all the way down from Buffalo NY to Cleveland.  At one point, a long line of us were doing 25 miles an hour with flashers on, and I decided I was being stupid, and that I would stop as soon as I saw a motel, but by the time I did, it had cleared enough to just become an annoying, no longer dangerous drive. I gratefully arrived at Cindy’s late, and we, too stayed up late talking, talking, talking, and made some tentative summer plans.  She didn’t see my note asking to be woken next morning, which was ultimately good; I slept a couple of hours longer than I would have, which I was thankful for during the drive home.  Then: the bank, to FINALLY deposit the check that had sat uselessly on my desk all month in Vermont, a quick stop at Busta gallery to pick up my (thankfully packed) work, and a visit and lovely homemade-by-Lady lunch and talking, talking, talking at the Smiths‘ (where I forgot to retrieve my hearing aid case, which is thankfully a reason to return – as if I need one!)  I really, really wanted to stay at Velma’s, Cindy’s and Smiths’ (and to stop at the Morgan and stay too) but I was also very, very grateful to arrive safely home, and for the fact that I’ll be staying put for a good while now.

Yesterday, I delivered the work to ZIA gallery for this: the opening reception is on Saturday, the same day as the Ragdale holiday party (where I’ll go, quickly, first). ZIA gallery director (and artist) extraordinaire Anne Hughes was packing things to be shipped to Miami for this…and a portion of (S)Edition is attending!

Lupe can also be camera-shy up close, but she has not left my side for more than a few minutes since I returned.  And now, today: I’m sending some things off to Australia, hanging up the wee seasonal lights, and The Bro arrives for a week of Our-Own-Early-Winter celebration: more abundance to be very thankful for.