I started to do my annual odd search engine terms roundup, but guess what?  There weren’t any really great weird ones this year.  They were quite specific: for me, for individual works, for residencies and/or places I’ve taught, papermaking equipment or techniques, friends, people I’ve mentioned and book arts references.  Though I do like the oddities, 2013 says some rather good things about the folks who drop in: thank you!

2013 was a really good year, I think because of my decision to spend more time at home, and the high quality of the 12 places I did travel to. I hope to be revisiting some of them here on the blog this winter,  and on MakerCentric. I have some great hopes for 2014, my most intentionally quiet year yet, and I’ve put some good effort into making some of those hopes manifest, beginning quite soon.

We’ll have a quiet, warm New Year’s Eve at home, as Chicago gets blanketed with fresh snow (I’m still not quite out from under this lengthy cold / sinus / respiratory thing). I’ll be wishing you all a happy, healthy, productive and above all peacefully balanced 2014!

I hope you’ve all had warm and happy holidays, and that they continue on through the new year. Today Paul is out  at the family get-together 50 miles away, but I am at home.  I’ve been battling a nasty and tenacious sinus and respiratory bug for six days now, and don’t want to infect anyone. We’ve had a good, if necessarily subdued time in spite of that. I even managed to make us two full holiday dinners (one vegan, one not) and some ugly but tasty pies. Hopefully it’ll abate soon, and I’ll get back to doing and blogging. Cheers! 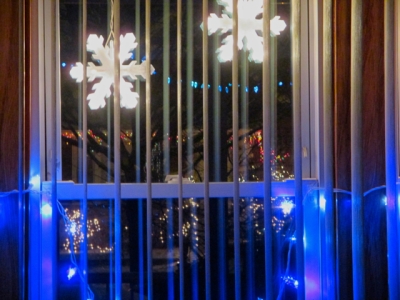 Busy; a lot is going on, all good, but not much to write about (yet), with (of course) upcoming holiday-related things thrown in. We’ll have an extra celebration for a few days in early January. Otherwise, the snow came and stayed, our lights are up, and I’ve knocked out a good bit of 2014 prep. A nice end-of-semester interview paper came in (and also became a book). Paul brought the press platens home: heavy, sturdy and beautiful. They need just a tiny bit of tweaking; we’ll do that and install them together soon.

I did finish the mulberry and was rewarded with a bit over 3 pounds of lovely fiber. It was intense work, but good to have that quiet studio time. I sharpened up my knife just a wee bit more, and did the scraping properly. I saved some but not all of the chiri to make sheets with, mostly just because I have it and I can.  (While working, I remembered seeing chiri paper for the first time, oh, over 35 years ago. I found a few sheets in a surplus paper store I used to religiously frequent in Cleveland. At that time, I really knew nothing of paper other than as a surface to draw on. I thought it was just beautiful. Then I moved to Chicago, found Aiko’s, and learned that chiri paper was considered to be very low-quality, and was mostly used to wrap fish. That humbleness didn’t exactly alter my opinion, but all the other wondrous papers Aiko’s stocked did quickly eclipse it.)

I actually enjoyed the labor; got into a certain rhythm and a contemplative space. For the final scraping session, I had put aside about 25 wide tough-barked pieces from older branches. Back when I used to buy my kozo from a place that ordered it by the bale, I’d dive in to search for ‘fat kozo’ – those same wide tough pieces no one else wanted.  They’re more difficult to hand-beat and can be stringy, their fibers the ones most likely to be picked out of a vat. But they are perfect for building with. Most of these pieces will eventually become book covers. It was quite satisfying to shape them, to decide how each would be finished, how the pattern would be exposed, what anomaly to feature, and to realize that, later, when they are used one by one, it will be a very different experience than working around someone else’s efforts.

Tomorrow begins another wee adventure: I pick up a brand-new Mac PowerBook.  Then there will be all the fun of data migration, and then (slowly, I’m sure) a year’s worth of web site updates, interspersed with studio, and all this new fiber.  Sounds like a fine plan to me! 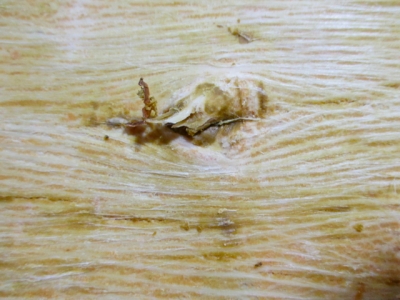 Mulberry week continues and extends. Thursday, I harvested all the white mulberry from the yard, while the second batch of red/black steamed (I did manage to stuff it all into two pots). There was more white than I thought, but two distinct bark varieties; I kept them tied in separate bunches, and was able to steam both together. I also trimmed the lower branches of the volunteer Rose of Sharon tree in the back garden, to keep it from shading its area too much, and steamed that upstairs on the kitchen stove in the small stockpot. I came up to check it after stripping the second batch of red/black mulberry just in time to find the house rapidly filling with smoke. The water had boiled away; I was inadvertently making Rose of Sharon charcoal. Oops. I tossed the pot onto the back porch, grabbed fans, and sucked the smoke out while pulling (very) cold fresh air through the house, then stubbornly added water and went ahead with the steaming.  I lost about an inch on each branch, but still got some fiber to try. And the smell is fading…

Took Friday off to make a few decisions, then yesterday converted the wee studio and began to scrape. The red/black mulberry is difficult, because of how it grew, un-trimmed limbs from big trees, very twisted and convoluted, full of small branches (it was only cut because my friend’s incoming electrical wires got caught in it).  I knew I was going to harvest the white mulberry and kept it trimmed during my summer visits home, so it’s lovely and straight. 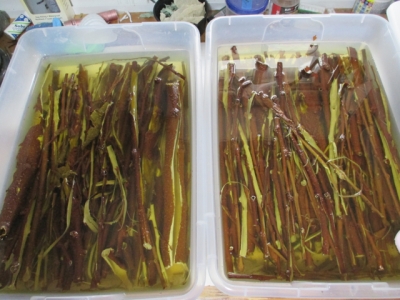 Today was spent on an app for something I really want that has nothing to do with art, work, money or travel, though it was nearly as extensive a process as applying for any of those. Fingers crossed. Tomorrow, back to it; I’ll be scraping bark every other day. 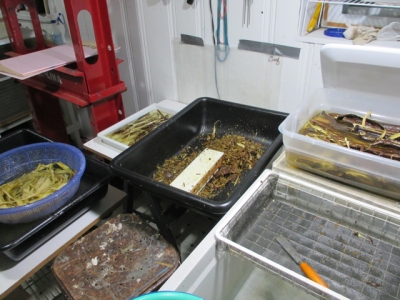 On Tuesday, the new press beds arrive. We’ll need to devise their installation supports and install a hose fitting, but very soon: tons of new fiber and complete processing facilities. Repeat: loving this time at home. (And the snow arrived today, too). 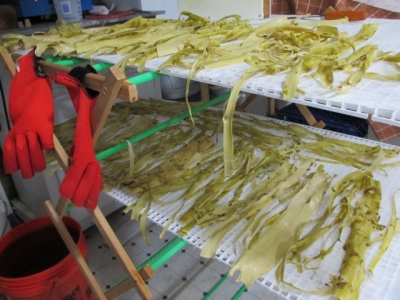 While I was harvesting, steaming and burning fiber, Emily Martin’s Pantone Postcard Project began its first official exhibition, in Iowa. In the past few months she’s also given the project informal showings in Venice, Italy (Tipoteca Italiana and the Scuola Internazionale di Graphica di Venezia), the Rare Book Room of the Library of Congress and the annual Guild of Bookworkers meeting in Washington, DC, and the National Library in Santiago, Chile. You can read about all that and see the entire project here (scroll down for the individual postcards).  Thanks, Emily.

I wasn’t quite ready, but yesterday began it; the friend who had texted me about mulberry as I left Ragdale came back from his holiday on Monday. We spent a nice grey foggy Tuesday afternoon catching up while we cut apart about half of what he’d salvaged when a mature group of trees were radically trimmed in the lot next to his house. It’s either red or black mulberry.  I had some concern about the fact that it had been sitting for over a week, but the limbs were huge and still full of sticky sap, and the bark still strips pretty well even without steaming. Today I finished sorting out the studio, unpacking from Ragdale and clearing the remaining bits of October production chaos.  I’m about to go get some aluminum foil to seal the gap between my two largest studio stockpots, and begin. There are two, perhaps three batches to steam and strip. If I like the fiber, I’ll visit again and take the rest; there’s also a smaller amount of white mulberry still to be harvested in my yard.  I’d like to be making things but this is (late in) the harvest season: it’s now or not. 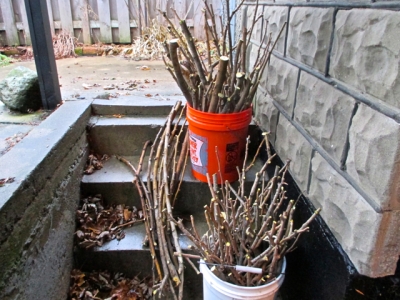 Of all the things I never quite imagined I’d ever say, this is probably near the top, but: you can now buy some of my work on, I am not kidding,  Amazon, via ZIA Gallery.  (Of course, it’s better for me and the gallery if you buy from ZIA directly).  I wrestled a bit with it, and eventually decided, OK, it’s odd, but why not?  This work has been made, has made its rounds, and my mind is on what’s next, so: off to process more fiber for that. 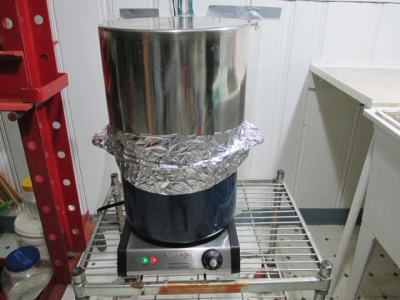 (A wee bit later; yep, it will be three steamed batches. I am loving the fancy new hotplate, which proved itself immediately at Ragdale; much more powerful than the one I used for years. But at times like these, I do think wistfully of the Morgan’s big cauldron. And volunteers! Though I did have one, who will also be putting the final coat of marine varnish on the snazzy new press beds he built, tomorrow. Press next week!)

Four days of holiday-related activity are finished: Wednesday’s great menu-planning, shopping and cooking marathon, our own celebration on Thursday, the family gathering on Friday, ZIA’s lovely annual group show opening last night.  Today officially begins what I now call my annual sabbatical. There’s lots to be done, mind you: an entire year’s worth of artwork to add and and reorganization to be done on the web site, catch-up blogs, lots of paperwork for 2014 events, decisions to be made (will I take on a local February event? do a little personal travel? apply for anything? go ahead and transition to a new computer? etc.), artwork to be finished and begun, new fibers to be tested, choosing which  of the ongoing, never-ending house projects to address, and so on: but it’s all my time, my scheduling, my prioritizing.  Today, I begin in the gardens, harvesting, cleaning up, distributing seeds for 2014…I love this freedom.