We got just under 20″ of snow; the next day was beautiful, with dramatic blue sky, and bright sun on shapes honed by the windy storm… 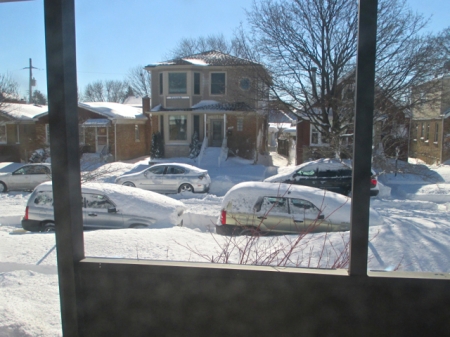 …including our temporarily-aerodynamic cars. One of them is back to its square-ish self now.

Those few seconds of viral-ity I wrote about in the post-before-the-last have now turned into two weeks; it’s slowed down some but hasn’t stopped. (S)Edition spores still spread. The e-mail has finally ebbed, but the deluge contained a few little gems of possibility; some nice things are under discussion. It’s been a fairly amazing experience.

This exquisite pattern on the garage window didn’t last long in the light that showed it off.

I also took on a great summer project that comes with a small grant, and am working on an interesting set of interview questions. Those things weren’t connected to the internet activity; they sprang from other spores at a place I love. Just to keep things in perspective, I also was rejected from a fellowship I was invited to apply for.

The day after the internet dam broke, I threw out my hip somehow, resulting in lower back spasms that haven’t abated, limiting mobility. Last week I visited the medico / insurance conglomerate, which yesterday approved a new round of physical therapy, for which I am utterly grateful, and eager to begin.

All these things have cut a chunk into winter plans; something had to give, especially to make room for p/t. Farewell, house project.  I’ve lived with the awful wallpaper I’d planned to collage over for a long time now, so I guess I can ignore it till next winter.

The led lights came down today but the green glass globe stays to capture the returning light.

Though I’m late, I want / need to note the recent passing of another wonderful, influential book arts person: Arthur Jaffe.  Though I never met him in person, he was an early supporter of my work, and we enjoyed some excellent e-mail exchanges. I was impressed by his his enthusiasm, expansive personality and wit, and I’ve always rather loved his description of why he collected the pieces of mine he did.  One of the many amazing stories about Arthur is what he did during WW2: he fired shells stuffed with leaflets into Nazi Germany. They exploded and papered the landscape with information on how to defect or surrender, which resulted in a steady stream of lives saved. Is it any wonder that he had a singular, expansive, and truly intelligent view of what a book can be, after experiencing such an example with all his senses? We’ll miss you, Arthur, and thank you. We need more like you.

3 thoughts on “Not just yet, and farewell.”